"It is true that in the first half Spain had more possession without creating major problems. We lacked some patience, we played with a lot of long passes, but at passing the ball the team did well and got there," the coach explained 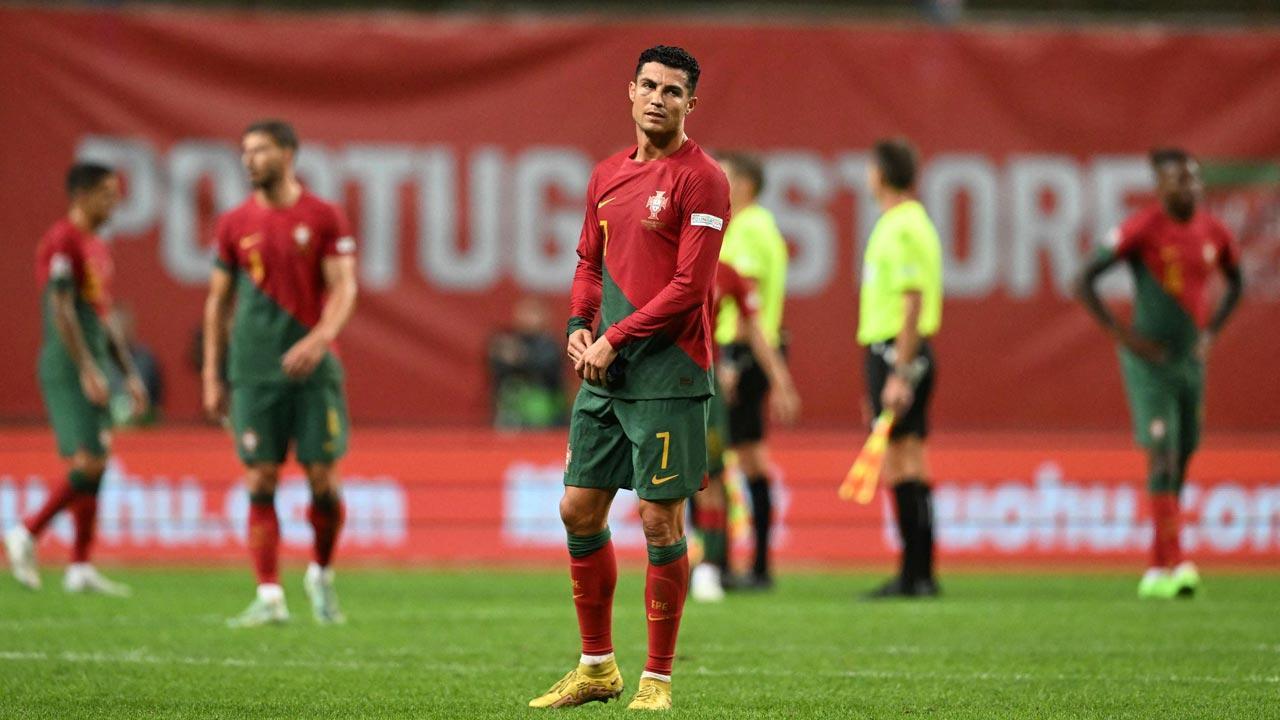 Portugal's forward Cristiano Ronaldo looks on after the UEFA Nations League, league A, group 2 football match between Portugal and Spain, at the Municipal Stadium in Braga. Pic/AFP


Portugal manager Fernando Santos has claimed that his team's elimination from UEFA Nations League A was unfair. At the Municipal Stadium in Braga, visitors Spain upset Portugal 1-0 with Alvaro Morata's 88th-minute strike to top Group 2 with 11 points. Portugal finished second with 10 points.

"It is true that in the first half Spain had more possession without creating major problems. We lacked some patience, we played with a lot of long passes, but at passing the ball the team did well and got there," the coach explained.

According to Santos, Portugal created goal situations, while Spain did nothing but try to stay more in possession, reports Xinhua.

"We tried to correct that at half-time, and we were pushing hard at the restart. We had a great opportunity, but we didn't take it, and then Spain started to have more ball; and we had more difficulty, lowering the lines without being able to connect the game," he said.

The coach regretted that he "wanted to be in the finals" of the UEFA Nations League and that he "worked for it with the conviction that he was going to make it."

Portugal midfielder Ruben Neves said that he had expected a difficult match against a qualified opponent, but that they needed to win because they were at home. "In the first 15 minutes we gave Spain too much space to have the ball, although they didn't create great scoring opportunities," he argued.

"Then we adjusted our pressure, we controlled the game well and we had some opportunities in the first half. In the second we started well, we had more ball; we created clear goal-scoring opportunities again, but unfortunately, we couldn't score," he lamented.

According to him, it was a "distraction move" that allowed a cross to come out into the area, and that ended up resulting in a goal. "It had happened to us once and we made the same mistake again. Now there is no room to think more about this competition," he concluded.

Meanwhile, Spain coach Luis Enrique celebrated with rare euphoria after his team's qualification for the semifinals of the UEFA Nations League A.

After beating hosts Portugal 1-0 in Braga, Enrique stressed that there is still "one step to go to the final and win the trophy" after Spain finished runners-up last year.

"We had one objective in this challenge: to take the ball out of Portugal's possession. We achieved that goal in the first part, but without depth, without creating danger," he explained.

"In the second half we corrected, we improved, and with the arrival of the rested players, with a better physical level, we generated a continuous approach to the goal until we scored, near the end. It was decisive," said a visibly moved Enrique.

The coach also noted that it was "important not to forget the work of those who were already on the field from the beginning, which tired the opponents."

He explained the substitution of defender Hugo Guillamon to make way for Sergio Busquets at half-time, saying Guillamon's "yellow card could have made it easy for Portugal, who have great strikers."

"Both teams played their game. Portugal played in the transitions and defended well, as a block. Spain deserved to win? Football is sometimes unfair, the Portuguese may think they had enough chances to win, but we scored. The result is what matters in the end," he added.

Next Story : Change of guard in Qatar?