Luxury in the wild at Jim Corbett National Park

The famed safari to spot the elusive Shere Khan aside, Jim Corbett also makes room for those who just want to stretch their legs and relax... [Read More]

In his first book, mid-day's crime editor Bhupen Patel lets you in on why a sting demands courage and prudence, especially when it's unearthing the dirt on Arab customers marrying young girls for sex and service... [Read More]

After almost a week’s search, the Norwegian vessel MV Hoegh, carrying Indian Army trucks for US’ peacekeeping mission to the Democratic Republic of the Congo, has been released by the Kenya coastal police from the Mombasa port where it had been detained... [Read More]

UN says weapons, narcotis on ship en route to Congo were not declared due to miscommunication

The UN said the Indian authorities had provided a list of the weapons only after the ship had sailed from Mumbai and it wasn’t possible to amend the manifest later, despite a request from the UN contractor to the Mombasa shipping agent... [Read More]

A day after mid-day reported the recovery, in Kenya, of suspected drugs and firearms from trucks being transported from Mumbai for a UN peacekeeping mission, intelligence officials told this paper that over 20 crewmembers of the Norwegian-flagged vessel that was carrying the trucks have been detained... [Read More] 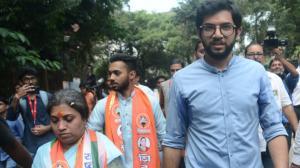 BJP`s Murji Patel and Uddhav Thackeray-led Sena`s candidate Rutuja Latke on Friday filed their nominations on Friday for the November 3 Andheri East Assembly by-election. Murji Patel is the joint candidate of the BJP and the Shiv Sena faction headed by Maharashtra Chief Minister Eknath Shinde. Whereas Rutuja would be supported by the Congress and NCP. The Andheri East byelection would be extremely important for Uddhav and Shinde factions and a tough competition is expected between both the candidates. Pics/Sayyed Sameer Abedi... [Read More] 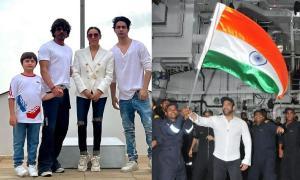 The `Raees` actor took to his Instagram handle and posted a video where AbRam was seen hoisting the Indian flag along with his family which included Shah Rukh, Gauri Khan and Aryan Khan. From hearing about their lives, training, time away from loved ones, and hoisting the Indian flag, Salman had a fun-filled day with the members of the Indian Navy. Watch video! Nimrat Kaur speaks about her father Major Bhupender Singh who was awarded the Shaurya Chakra posthumously. Style secrets of Janhvi Kapoor, Ananya Panday, Tara Sutaria, Nora Fatehi and other stars unveiled!    ... [Read More] 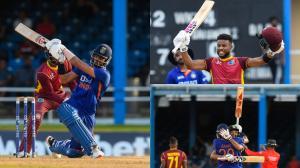 In yet another hard-fought, thrilling contest, India came out on top thanks largely due to all-rounder Axar Patel`s whirlwind knock of 64 from just 35 balls. India chased down a score of 312 with just 2 balls to spare and 2 wickets left in the bank. Pictures Courtesy/ AFP... [Read More] 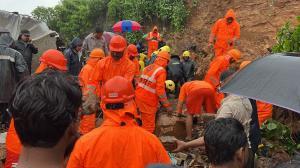 A man and his teenage daughter were killed and two other family members injured on Wednesday after a landslide in Vasai town of Maharashtra`s Palghar district following heavy rains, officials told PTI. Pics/Hanif Patel... [Read More] 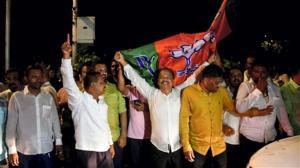 Rajya Sabha polls: Here's a list of winners from Maharashtra

In a late-night counting for the Rajya Sabha polls in Maharashtra, the Bharatiya Janata Party won all three seats it had contested, beating one of the Shiv Sena candidates. Shiv Sena`s Sanjay Raut (41 votes), the Nationalist Congress Party`s Praful Patel (43 votes), and Congress`s Imran Pratapgarhi (44 votes) were elected without any hassle. BJP`s Piyush Goyal and Dr Anil Bonde won 48 votes each while the third candidate Dhananjay Mahadik got 41.56 votes. Pic/PTI... [Read More] 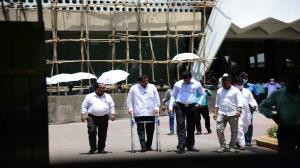 Voting for the six Rajya Sabha seats in Maharashtra began on Friday morning at the Vidhan Bhavan, the state legislature complex. The polling process commenced at 9 am, and the results will be declared in the evening. There are a total of seven candidates in the fray for six seats. While the BJP has fielded Union Minister Piyush Goyal, former state minister Anil Bonde and former MP Dhananjay Mahadik, the Shiv Sena has given the opportunity to MP Sanjay Raut and Sanjay Pawar. From the NCP, Praful Patel is in the election ring, while the Congress has fielded Imran Pratapgarhi. The 288-member Legislative Assembly is the electoral college for the biennial elections. The total votes have come down to 285 though, since there is a vacancy due to the death of Shiv Sena MLA Ramesh Latke, and the Bombay High Court on June 10 rejecting the pleas filed by minister Nawab Malik and former minister Anil Deshmukh seeking a day`s bail to vote in the elections. Pics/Pradeep Dhivar... [Read More] 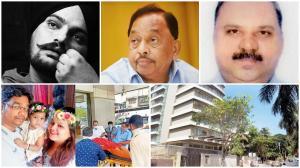 BJP workers in Gandhinagar celebrate by dancing as the party heads towards a landslide victory in Gujarat. BJP leading on 152 of the 182 seats, as per the official EC trends.... [Read More] 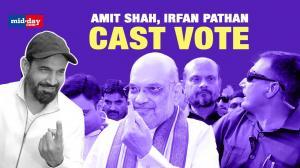 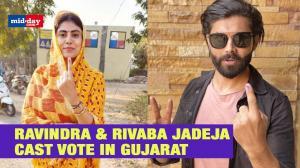 Cricketer Ravindra Jadeja on Thursday cast his vote at a polling station in Jamnagar during the first phase of the Gujarat assembly elections. His wife Rivaba Jadeja is a BJP candidate from Jamnagar North while his father Anirudhsinh Jadeja and his sister Naina Jadeja had campaigned for the Congress. Speaking to the media earlier in the day, Rivaba Jadeja said the BJP will win by a good margin.... [Read More] 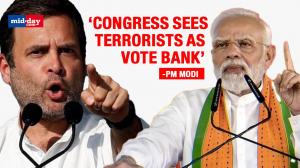 ‘Congress Looks At Terrorism From The Point Of View Of Vote Bank’: Narendra Modi

Prime Minister Narendra Modi is in Gujarat today ahead of the Gujarat Assembly Elections. He has his rallies in Kheda, Jamnagar in Gujarat. PM Modi in Kheda criticised the congress party for shading tears over terrorists and targeting him but terrorism. ... [Read More] 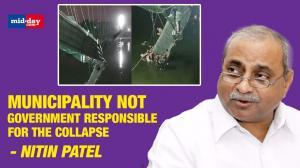 Morbi Bridge Collapse: Municipality Not Government Responsible For The Collapse

BJP leader and former Gujarat Deputy CM Nitin Patel said that `Municipality is responsible for the Morbi accident, not Gujarat government. On 30 Oct, a bridge in Morbi Gujarat collapsed, which took the lives of more than 100 people.... [Read More] 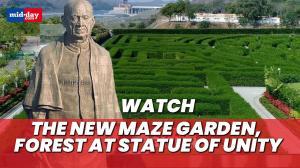 Miyawaki Forest, Maze Garden to be new attractions at Statue of Unity

Statue of Unity becoming a major tourist destination. Miyawaki forest and Maze garden are the new attractions. PM Modi to dedicate Maze Garden at the Statue of Unity. Maze garden is one of the two new spots at the Statue of Unity. It has been developed in a short span of just eight months. The Garden has been built in the shape of ‘Yantra’ that emanates positive energy. As many as 1,80,000 saplings have been planted near this Maze Garden. Miyawaki Forest will be another tourist attraction for people visiting Ekta Nagar. Through the Miyawaki method, a forest can be developed in just two to three years. ... [Read More] 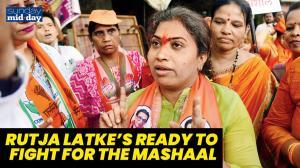 Wife of late MLA Ramesh Latke, a rank novice in politics, is all geared up for the upcoming Andheri East Bypoll. mid-day followed her during an election campaign in Powai... [Read More] 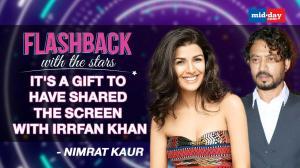 This is why Nimrat Kaur was called 'Bacche Kutni'

Nimrat Kaur joins mid-day.com`s `Flashback with the stars` where she recalls beating up boys much older to her as a child, breakthrough projects like `The Lunchbox` `Airflift` ` Homeland` and more, taking up `The Test Case` at a time when OTT wasn`t as big as it is today. Catch the episode for more!... [Read More] 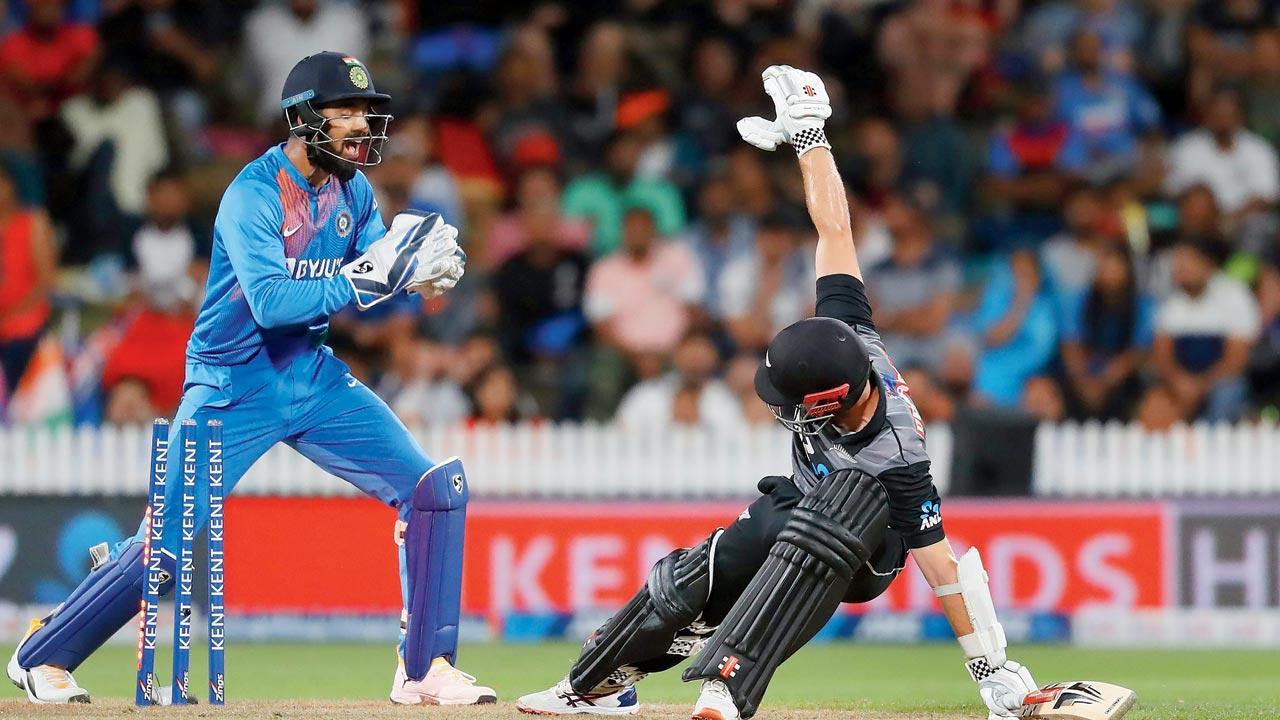