Chandu Pandit has instilled self-belief in the Madhya Pradesh side, who look all set to win their maiden Ranji title, like he does with all the teams that he coaches. He may not be everyone’s cup of tea, but he gets results and that’s the only thing that should matter 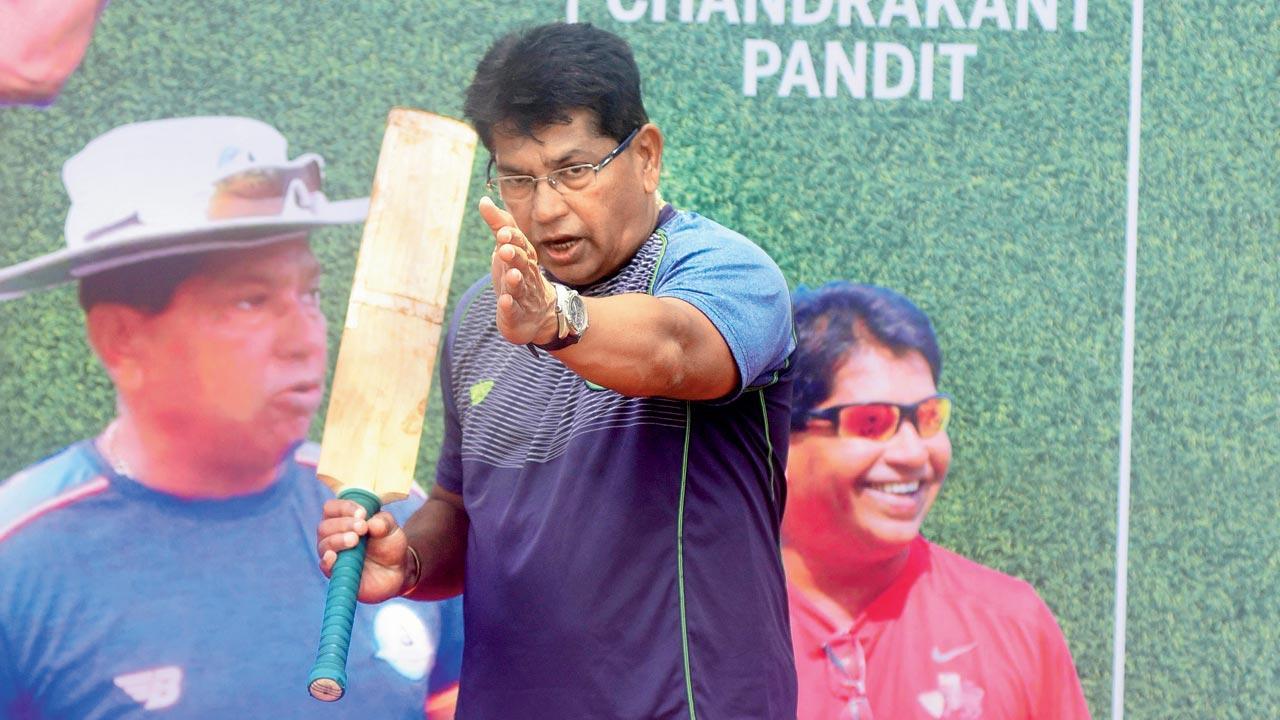 Chandrakant Pandit during a Mid-day masterclass session at the MIG Cricket Club, Bandra, in 2019. Pic/Atul Kamble

The magic of Chandu Pandit has worked again. Madhya Pradesh which have entered the Ranji finals after almost a quarter of a century are on the verge of winning the Ranji Trophy as this is being written. Pandit is the coach and there is thus no surprise that he has instilled a self-belief in this team like he does with all the teams that he coaches. Look at what he did with the Vidarbha team. He got them to win the Ranji Trophy not once but twice and the Irani Trophy too. Like Vidarbha, Madhya Pradesh are also a team without any super stars or big name players though after this year’s IPL, the cricketing world got to know of Rajat Patidar, Kumar Kartikeya and Kuldeep Sen the fast bowler. There is also Venkatesh Iyer who is on India duty against Ireland. Both Sen and Iyer did not play the finals but that seemed to have hardly made a difference to the Madhya Pradesh team as they have played some top cricket to get to the finals and now will be the new Ranji Trophy champions.

This knack of making a team of unknown players into a champion team is one of the reasons why Pandit is a much sought after coach in domestic cricket. He gets his boys to play street smart cricket and to never give up. That’s exactly the cricketer he was. Tough as nails with a smile on his face always, he looked laid back but had his eyes and ears open all the time picking up little tips and nuances from the home team as well as the opposition. He is also the consummate bluff master and this is said about his cricket and in great admiration.

We saw his bluffing skills when he was the wicketkeeper in the Adelaide Test match against Australia way back in the 1991-92 series. Kiran More was injured and Pandit replaced him in the XI. David Boon had gone past a century and looked hungry for more when a ball went off his thigh pad down the leg-side. Pandit moved towards the ball slowly making Boon think that he could stroll to the other end comfortably and looked away from the ball for a second or two. Suddenly, Pandit had increased his stride, reached the ball, taken off the big glove from his throwing right-hand and in one motion had thrown to the far end near the bowler and flattened the stumps even before Boon had realised what had happened. The expression of disbelief on Boon’s face as he walked back to the pavilion is still etched in memory. The bluff had worked incredibly. Pandit of course may not be everyone’s cup of tea but he gets results and at the end of the day that’s the only thing that should matter.

Coaches like him and Lalchand Rajput under whose coaching India won the inaugural T20 ICC World Cup in South Africa will never get the IPL coaches gigs because they don’t fit the bill as to what the coaches should look like. They get results but the IPL franchises will want fancy names in their support staff.

Mumbai look like going the Serena Williams way, getting into the finals but stumbling there and not getting the hands on the trophy. Serena is just one major title short of equalling the record of Margaret Court’s major title wins. She has regularly got to the semis or the finals but has just not been able to deliver the knockout blow. Mumbai too seem to do well till the finals where something or the other lets them down.

Sarfaraz has made his point

Sarfaraz Khan’s tremendous run of hundreds should bring him into contention for a place in the national team where with Rahane gone and Pujara getting one last chance to score and keep his place in the team and go on to play a century of Test matches the door could open for Sarfaraz. He certainly has banged the selection committee’s door down and it would be a real surprise if his name doesn’t figure in the squad for the next Test series.

There are some others too like Rajat Patidar who has also been tremendously consistent in what has been a breakthrough season for him. India are blessed to have such talent which is keeping the seniors on their toes and ensuring there is no room for complacency at all.

Next Story : Non-violent, peaceful protest is the way to go