Holding placards, the protesters raised slogans against the new government's proposal to shift the Metro-3 car shed project back to Mumbai's Aarey forest 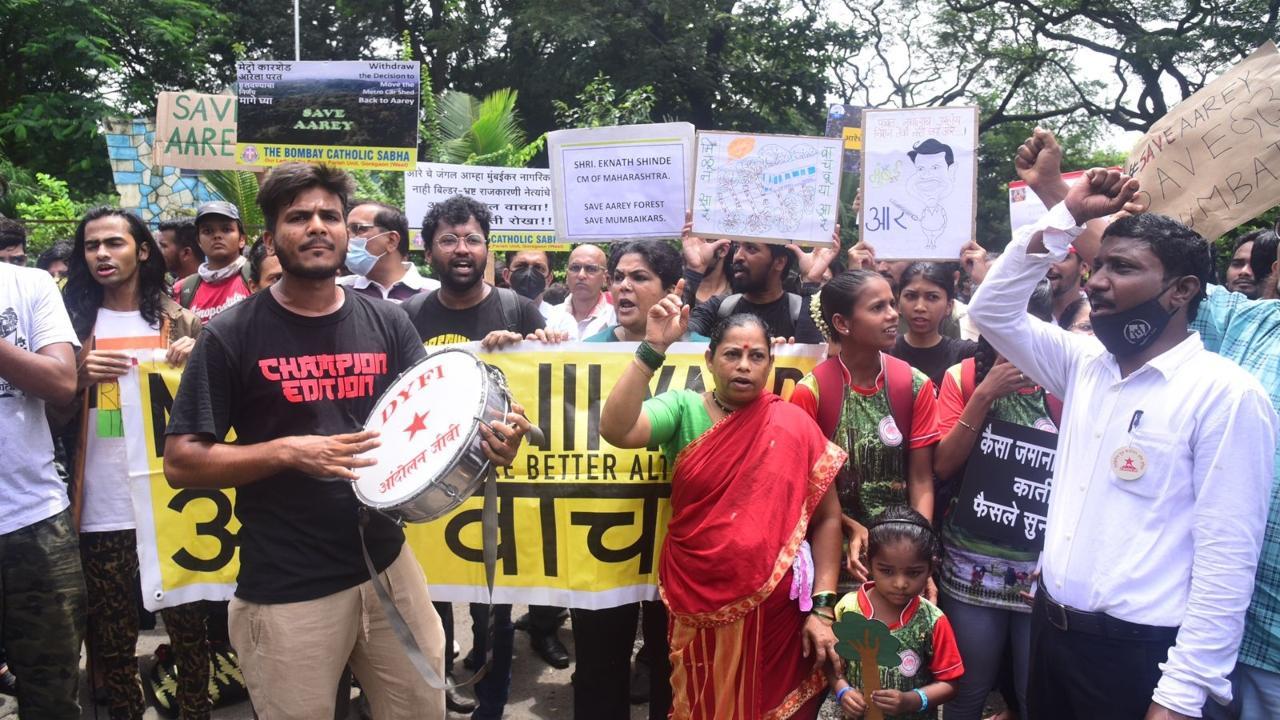 
On Sunday, environmental activists staged a protest at Aarey Colony against the Maharashtra government's proposal to build a Metro-3 car shed at the site.

Holding placards, the protesters raised slogans against the new government's proposal to shift the Metro-3 car shed project back to Mumbai's Aarey forest, an 1,800-acre area.

In their first cabinet meeting held soon after their swearing-in ceremony on Thursday, Maharashtra CM Eknath Shinde and deputy CM Devendra Fadnavis had directed the state administration to submit a proposal to build the Metro-3 car shed in Aarey Colony instead of Kanjurmarg.

The previous Uddhav Thackeray-led Maha Vikas Aghadi (MVA) government had shifted the proposed car shed site to Kanjurmarg from Aarey Colony on the ground of environmental protection, but the issue got embroiled in a legal dispute.

Some leaders and workers of the Shiv Sena as well as its youth wing Yuva Sena participated in the protest.

Party MP Priyanka Chaturvedi, who participated in the protest, accused the Eknath Shinde-led government of politicising the issue.

"What harm have Mumbaikars done to indulge in such politics? Why are you seeking revenge from Mumbai for your politics? If you have anything against us, fight us, why fight Mumbaikars," Chaturvedi said.

According to environmental activists, the forest not only provides fresh air to people of the city, but it also a key habitat for the wildlife, including some endemic species.

Ruben Mascarenhas, the working president of Aam Aadmi Party's (AAP) Mumbai unit said, "Aarey is the only urban forest ecosystem in the world and must be saved at all costs."

He said as a minister in the Uddhav Thackery-led government, Shinde was in favour of the Metro-3 yard being shifted to Kanjurmarg and was part of the decision.
"His U-turn right now is astounding," he said.

(with inputs from PTI)