In its petition for disqualification, the CM faction said that the 16 MLAs have rejected the party whip’s instruction to attend official meetings 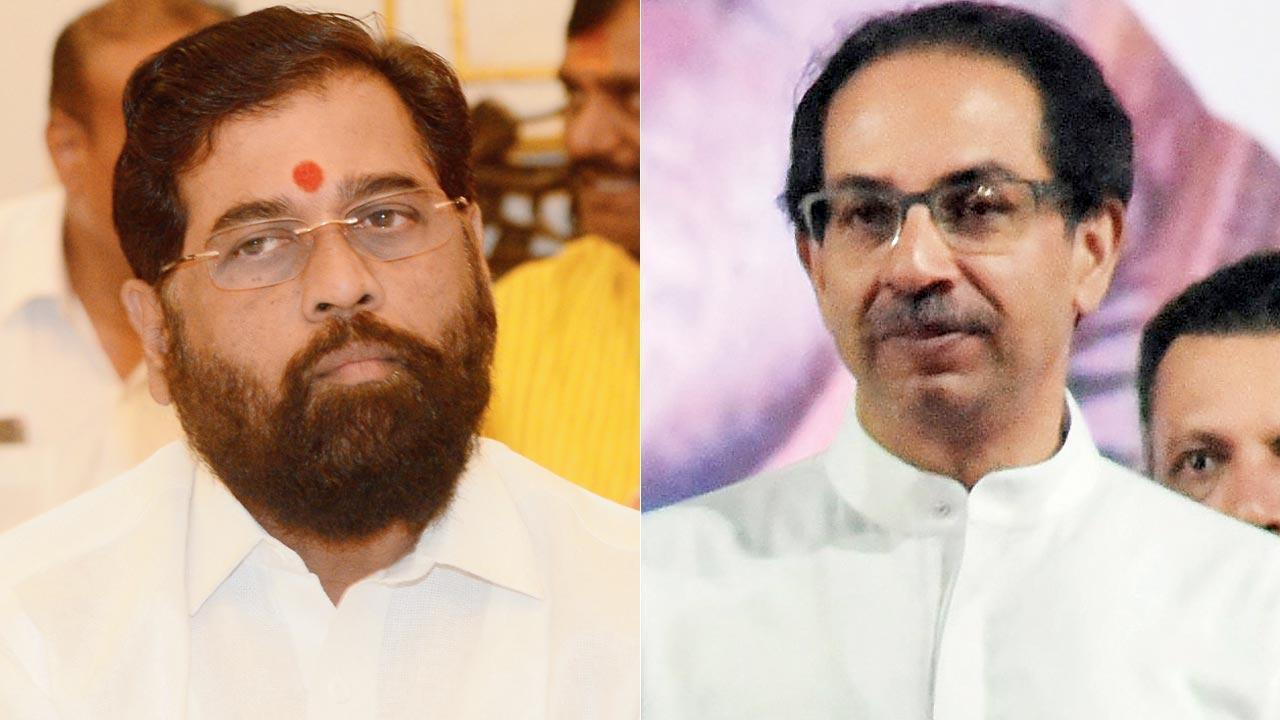 Eknath Shinde might move the Bombay High Court while Chief Minister Uddhav Thackeray and the MVA also have legal experts to guide them. File pics


In a strategic war to wrest control of the legislative party, the Shiv Sena has sought the disqualification of 16 MLAs, including rebel leader Eknath Shinde. In another setback to the mutineers, the acting speaker has denied Shinde’s camp the post of legislative party leader and rejected the appointment of a chief whip suggested by the rebel group.

Shinde is preparing to counter the decision by moving the Bombay High Court. He has claimed that he has support of more than two third of the Sena’s Assembly strength and termed Deputy Speaker Narhari Zirwal’s decision unconstitutional. He has added that deputy speaker Zirwal cannot take any decision when a no-trust motion was pending against him.

Shinde is likely to petition Governor Bhagat Singh Koshyari as well. A battery of lawyers has been deputed to counsel the rebel group which hasn’t left Guwahati yet.

The Sena also has legal experts at its disposal. NCP boss and MVA’s architect Sharad Pawar has also been sharing his vast experience of parliamentary affairs.

In its petition for disqualification, the CM faction said that the 16 MLAs have rejected the party whip’s instruction to attend official meetings. It had asked that 12 be disqualified on Thursday and added four more to the list on Friday. Disqualification would reduce Shinde’s group to a minority. Shinde has claimed to have support of 41 Sena MLAs and 9 independents.

However, Shinde released a statement from Guwahati that the CM’s faction was in minority and making such a demand was unconstitutional. “If they know the law, we also know it. We are a separate group which enjoys the legislatives party’s powers and rights that the unauthorised people have been trying to use,” he said.

Independents Pradeep Jaiswal and Mahesh Baldi have written to Zirwal and the Legislature’s Secretariat that they will have to abide by the 2016 decision of the Supreme Court in a similar matter in Arunachal Pradesh. “The deputy speaker cannot decide on disqualification when a no-trust petition against him is pending.”

They said that the mandatory seven days’ period given to MLAs for explaining their position against disqualification proceedings may also be scrapped in the current scenario and the decision may be taken in great haste.

Shiv Sena MLA Bhaskar Jadhav had a word of advice and caution for the party’s chief spokesperson Sanjay Raut, who on Friday threw a challenge to the rebel group led by Eknath Shinde to fight in the streets of Mumbai and Maharashtra, because a 24-hour deadline given by the party for them to return home had ended.

Jadhav said, “I am not a big leader to advise Sanjay Raut who is a senior leader. But it is time to communicate with the rebels, not throw challenges at them, because discussions with them could help the Sena family to reunite.”

A section of the media had reported that Jadhav was out of reach. He shot back on Friday, questioning the false reports.

Earlier in the day, Raut dared the rebels to come to Mumbai if they really wanted to fight it out. “We’re not going to get defeated. We will fight in the streets. This is our challenge,” he said.

Raut said the party had given time to the Shinde group. “But the time is over. We will also win the trust vote in the Assembly.”

In the evening, there were reports of attacks on the offices of runaway Mumbai MLAs.